The winners of the Uptime Challenge awards were announced

On February 14th, we organized the Uptime Challenge during the Information Technology Days of the University of Tartu and anyone who wanted could try to solve some challenging programming tasks.

Uptime Challenge participants had to solve some programming tasks with best code and among the best programmers, we drew out two awards: Samsung’s 500GB SSD and weekly stock of pizza.

“In fact, the result was better than I was expecting and it was pleased to see that a lot of people were solving more than one task,” says Raimo Seero, the CTO at Uptime. “Many did all the tasks. Testing and developing your own skills is one of the key features of the software developer, and it’s good to see that this feature is not lost.”

And the winners are… 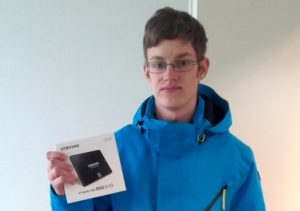 The new Samsung 500 GB SSD was won by Markus Saarniit (pictured above) and Ervin Oro won the weekly stock of pizza.

Congratulations! Winners were contacted and prizes were delivered in a meeting in Uptime Tartu office, where all interested participants had an interview about opportunities of practicing in Uptime during the summer vacation.

software development
We use cookies to provide you with a more convenient and safer user experience. By continuing the browsing session you confirm that you agree to the use of cookies. You can revoke your consent at any time by changing your browser settings and deleting the cookies stored. Read our Cookie Policy.No
Revoke cookies