In TechnoHack, a traditional format hackathon at Mectory technology centre in Tallinn, Uptime developers participated by building a hat for blind people which recognizes traffic lights. 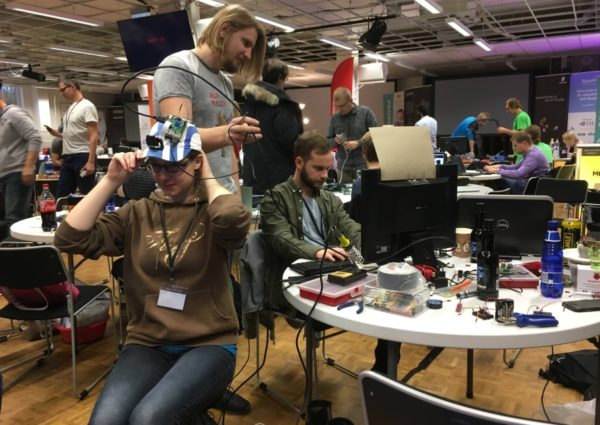 Teams arrived on Friday and they had to be ready on Sunday evening to present a working prototype, as this format of event usually demands. From Uptime, Tanel Hiob, Liisi Mõtshärg, Carl-Martin Ivask and Siim Orasmäe hacked the software and hardware for 48 hours to be ready for a Sunday presentation.

In Estonia, the most famous hackathon is called Garage48, but this is more software related. TehnoHack is more engineering oriented, so teams had to build something tangible.

“If you just want to build something awesome in a few evenings without having the pressure of looking good for potential investors, then TehnoHack is just the right place,” said Tanel Hiob, who has been invited to join the same team in previous years but has not found the free time to participate earlier.

Liisi Mõtshärg has participated in TehnoHack for two years. “One year we built a beverage-powered warming dish, but in the second year we developed a special solution for an online store,” he recalls. “This time I wanted to go to TehnoHack to spend an interesting weekend and get ready to build something tangible.”

Carl-Martin Ivask has never been in TehnoHack or any other hackathon, but has wanted to go to some of these events since the start of university. Now he has succeeded. “There has never been a situation where my friends wanted to participate and I have free time at the same time, and when someone would have at least one mediocre idea,” he said, explaining why he came to a hackathon for the first time only now.

Siim Orasmäe, who has left Uptime for now, asked who wants to participate at TehnoHack during the lunch break one day from co-workers and decided to go. The idea for the competition came from Siim, too.

What did they achieve within 48 hours?

Siim suggested that something could be done for the blind people who want to cross the street. After the discussion, it turned out that this might be a relatively independent device, such as a camera that could detect traffic lights and signal the user, when seeing green light nearby.
The name of the device, Ocugo 9000, is also Siim´s idea.

Because this solution needed a computer that processes and analyses the image, it was decided to use a small and easily adaptable Raspberry PI, which team members had experience using in the past. Since the hardware was already quite a big, it was most reasonable to attach it to a hat.

Ocugo 9000 signals, when the green pedestrian light appears in nearby. Technically speaking, the Raspberry PI computer running a program that analyzes the image from camera in real-time is looking for a green colour and a silhouette of a man. If the system finds something with a relatively high probability, it will signal about that. 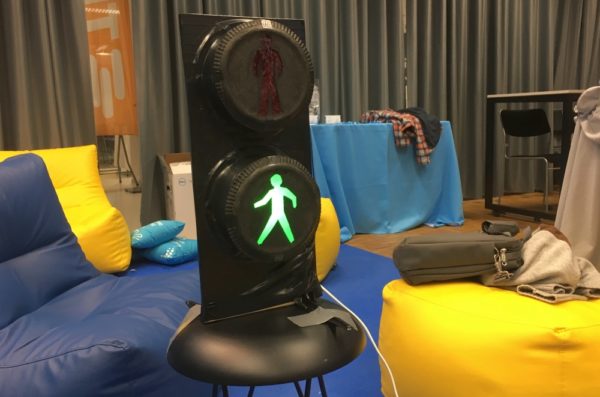 Tanel and Carl-Martin programmed the software, Liisi and Siim built a traffic light and a hat for the demo. On Friday, building started completely from scratch and finally, there was a working prototype ready on Sunday afternoon. 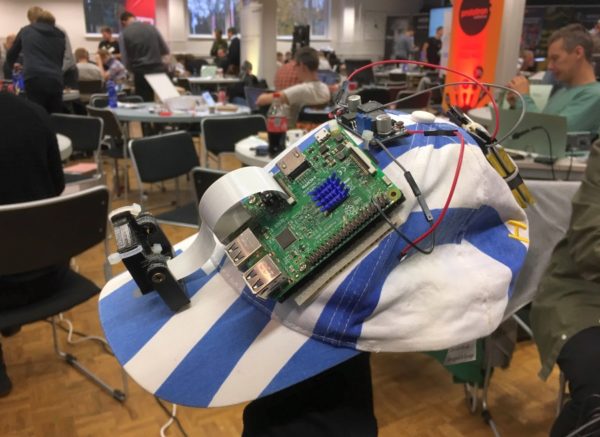 During the presentation the hat worked very well, since there was not a lot of green noise in the background. However, looking to the Mektory Botanical Garden, the hat began to react to the  green in the environment there, because one weekend was not enough to build an intelligent picture analysis software ready for work in different conditions.

What software was used?

The original version of the application was programmed in Windows: with Visual Studio and Python. On Raspberry PI, it had to be transferred to Linux and then colour calibration started.
Most of the code writing time went for calibration of colour tones and silhouettes, programming was quite easy in comparison. The next solution is already a highly trained neural network for detecting traffic lights, which the team did not come up with yet, as time was very short.
The code is downloadable at Github.

The problem with the hat was how to reliably fix the Raspberry PI unit and battery. Finally, there was a simple solution for that: a 3D printer to print the base and sew-screw it onto the hat.

On the first day, the team tested the hat with a drawn photo of traffic light and with a few photos of the city jungle. On the second day, a real traffic light was constructed, which helped to start the calibration of the application.

On the third day, Liisi walked around the house with the smart hat and tested the possible response to background noise in the camera image.

It’s clear that in 48 hours, this complicated hardware and software product is not yet ready. The Ocugo 9000 is not fully functional at the very first stage of its development, and it is not possible to use it in live traffic. But a basic demo unit is ready for further development.

“We need to do a lot of training to the application and add machine learning,” comments Tanel, “it needs to detect only the green traffic light. The hat surprisingly identifies all the Tallinn green colour buses, they are almost the same colour as city traffic lights.”

“Overall, the interest in our project was quite large,” Tanel says, “and we won a small prize. So, a very successful weekend!”

hackathonocugo 9000
We use cookies to provide you with a more convenient and safer user experience. By continuing the browsing session you confirm that you agree to the use of cookies. You can revoke your consent at any time by changing your browser settings and deleting the cookies stored. Read our Cookie Policy.No
Revoke cookies